Rounding up a gluten acquittal

Previously, in “Gluten 101”, I mentioned delving deeper into possible causes for the growing epidemic of gluten intolerance.  (For the purposes of this blog post, the terms ‘gluten sensitivity’ and ‘gluten intolerance’ will be used synonymously and will never include the diagnosis called Celiac Disease.)

Here, I present one consideration: what if a root to gluten sensitivity is a chemical that entered the American agricultural stage in the 1970s (1)? 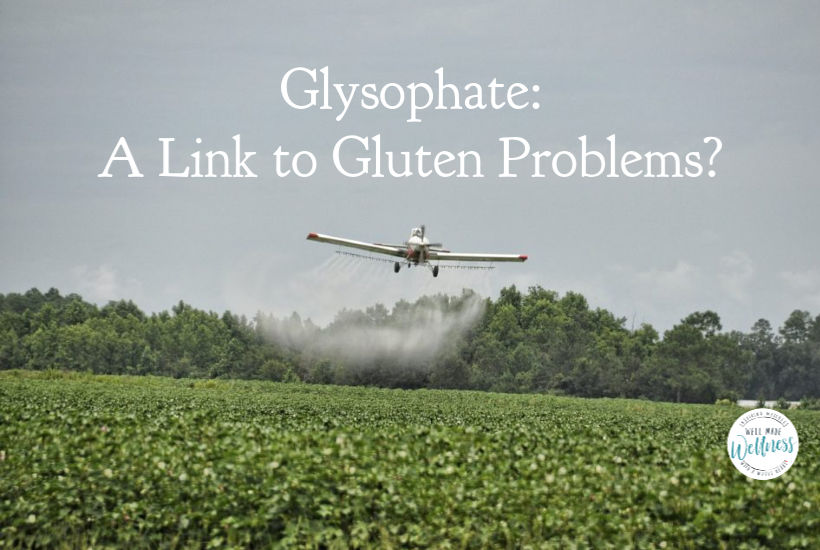 It couldn’t possibly be the wheat, itself, for that doesn’t align with the Bible. People have eaten grain – even hybridized wheat – for thousands of years without the problems seen today. The rate at which things like autism (practically unheard of fifty years ago) and auto-immune diseases have increased seems logically caused, in part, by external, environmental factors.

Although GMOs fit the same bill as today’s discussion, I believe the reason wheat (and gluten) developed such a bad reputation in recent years is not primarily due to genetic modification.

Evidence points to one main culprit:

Glyohosate is a weed killer, or herbicide, discovered in 1970 by a Monsanto chemist named John Franz. Monsanto is a Missouri based international corporation which happens to be the largest producer of both genetically modified seed as well as the herbicide, Glyphosate. Monsanto also formerly manufactured highly controversial products such as Agent Orange (think Vietnam War), DDT, PCBs, recombinant bovine somatotropin (a.k.a. bovine growth hormone) and the pink-packeted, artificial sweetener called Saccharin (5).

Glyphosate entered the American market under the trade name, “Round Up.” You’ll easily find it at most any home improvement store or garden center.

How are people exposed to Glyphosate?

Glyphosate exposure is virtually unavoidable. Glyphosate is applied to non-GMO, GMO and non-organic crops (10). Further troubling, Americans are at an even greater risk of Glyphosate exposure than Europeans due to looser USDA regulations on Glyphosate (3). How sad. Glyphosate is retained in the soils in which our foods are grown (9). Tests have turned up positive for Glyphosate in honey, infant formula, breast milk, oats, soy sauce, alfalfa grown for animal feed, corn, soy, sugar beets, cotton, water, wheat, cookies, bread, dairy…Get the picture? It’s everywhere. OVER EIGHTY PERCENT of our American food supply is laced with Glyphosate (13)! 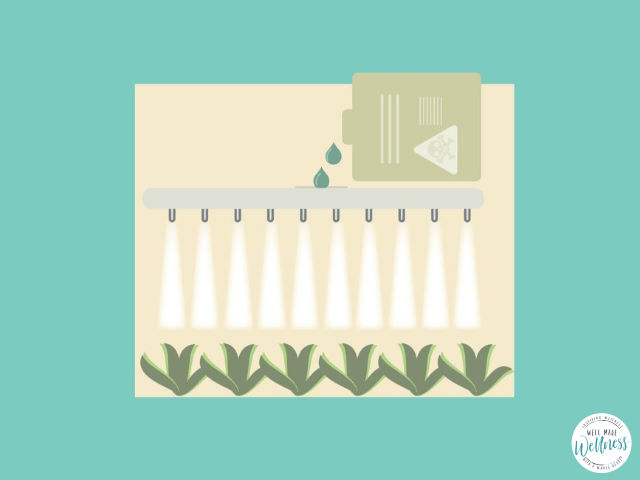 Pesticide Use in Agriculture – Well Made Wellness

What does Glyphosate do in the human body?

Scientists have come to know that Glyphosate is more harmful than originally believed. It’s negative effects on health are only beginning to be tallied. Sadly, Glyphosate proves itself insidiously harmful to human, not to mention animal and environmental, health.

For educational endeavors of Well Made Wellness to disprove the vilification of gluten, we will only explore three of Glyphosate’s ills:

The IARC, International Agency for Research on Cancer, states there is adequate evidence of Glyphosate’s carcinogenicity in experimental lab animals as well as causing chromosomal damage to human DNA cells (8).

In March 2015 the IARC classified Glyphosate as “probably carcinogenic in humans” basing this claim on epidemiological, animal and in vitro studies (6, 7).

Dr. Anthony Samsel, a respected research scientist who has intently studied the toxicity of Glyphosate, emphatically claims Glyphosate is not a possible carcinogen but, IT IS A CARCINOGEN! (11).

Recent studies suggest Glyphosate to be an endocrine disrupting chemical. This means it can upset your hormones. The results of a study by S. Thongprakaisang (19) purport Glyphosate, at low and environmentally reasonable concentrations, to be a hormone disruptor in humans (18).

Drs. Anthony Samsel and Stephanie Seneff claim Glyphosate upsets a liver detoxification pathway called Cytochrome P-450 in such a way that it manifests slowly and subtly over a measure of time, causing inflammatory processes and disease – including infertility (18).

Glyphosate “significantly changed the progression of puberty in a dose-dependent manner,” and reduced testosterone production in in-vivo rats. This study suggests Glyphosate stands as a potent endocrine disruptor, which caused developmental disturbances in the reproductive systems of pre-pubescent rats (17).

Crucial to know about the link between gut and immunity is this: EIGHTY PERCENT OF YOUR IMMUNE SYSTEM RESIDES IN YOUR GUT, and relies upon a healthy, proper ratio of good and bad bacteria in the gastrointestinal tract (15)!

I cannot stress this fact heavily enough! The health of the body is inextricably linked and utterly dependent upon a healthy digestive system!  I don’t think it can be deemed ‘normal’ to move your bowels twice per week, to have heart burn and diarrhea, to bloat, to scratch itchy skin, or to suffer persistent congestion and daily headaches! Health begins in the gut!

Glyphosate promotes the growth of pathogens (the buggies that make us sick) and it kills off beneficial bacteria that function to keep pathogens at bay – in the soil and in the gut of animals or humans that ingest the tainted food (16). Salmonella and Clostridium (both bad bacteria, or pathogens) are highly resistant to Glyphosate, whereas beneficial types of Enterococcus, Bifidobacteria, and Lactobacillus (all good bacteria) are especially susceptible to harm from Glyphosate.

What does that mean?

Glyphosate selectively kills off good bacteria in the digestive tract while allowing the bad bacteria to remain and flourish.

“[W]ith glyphosate, we also see an additional stimulation of virulence, so we see increased ability to cause disease, as well as the loss of the natural biological controls,” Dr. Huber says.

It’s important to know that Glyphosate spreads systemically throughout the plant or food, which means it cannot be rinsed off. It is incorporated into every cell inside the plant. Once you eat the apple, cheese or any contaminated food, Glyphosate lands in your gut where it can potentially wreak havoc on your health.

Could Glyphosate cause disease through the disruption of gut bacteria?

“The way Glyphosate works is that it interrupts the shikimate pathway, a metabolic function in plants that allows them to create essential amino acids,’ Seneff explained at a recent Autism conference. ‘When this path is interrupted, the plants die. Human cells don’t have a shikimate pathway, so scientists and researchers believed that exposure to Glyphosate would be harmless.”

However, she claims Glyphosate still harms humans even if the action is indirect.

“The problem is that bacteria DO have a shikimate pathway, and we have millions of good bacteria in our guts — our “‘gut flora,”’ Seneff continued. “These bacteria are essential to our health. Our gut isn’t just responsible for digestion but also for our immune system. When Glyphosate gets in our systems, it wrecks our guts and as a result our immune system.”

Have you heard of Leaky Gut? When harmful bacteria grow unchecked in our gastrointestinal tract, disease can form in multiple ways. Leaky Gut is a predominant manner in which intestinal integrity is compromised. In the simplest terms, God designed our intestinal tracts with a protective, mucosal lining. This mucosal lining keeps partially digested proteins, carbohydrates, fats – and yes, toxins – inside the intestinal tube, so to speak, where they can be either assimilated for nutrition or eventually expelled as waste. When the mucosal lining is compromised, likened to a leaky garden hose with holes, partially digested food and toxins may sneak through the intestinal wall and into the blood stream where they are reported to cause ills from allergies, to joint pain, to digestive disease, to migraines, to fatigue, to auto-immunity. This is Leaky Gut. This is what the imbalance of good and bad bacteria, caused by Glyphosate, can do.

We established that the bulk of our immune system resides in the gut. Which begs the question, “How healthy is your gut, how healthy are YOU?” 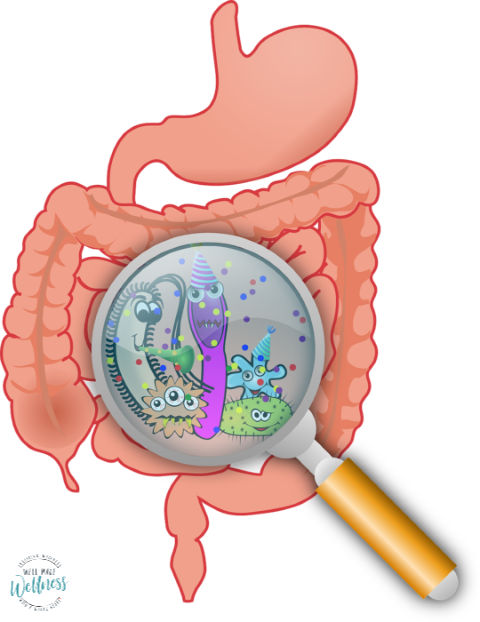 How do I avoid Glyphosate?

Avoiding Glyphosate is increasingly challenging. Foremost and best is to purchase only organic food. That said, Glyphosate is so pervasive in our environment – think rain, snow, soil, birds and insects moving it place to place – that even our prized organic foods are showing up tainted. An upstanding company called Tropical Traditions employs a program to specifically test for Glyphosate in their products, and thereby ensure against it.

A bit of good news is the FDA plans to finally begin testing for glyphosate exposure on American food (4).

Some resources suggest we should be more concerned about Glyphosate in our food system than the genetic modification of foods. I maintain equal opposition to both and will address the latter in an upcoming post.

Literally, I cried compiling information to share with you about Glyphosate. How much have we endured at the hands of this chemical?

Gluten intolerance is legitimate, yet I do not feel gluten is to blame.

God did not make Glyphosate.

The more I research, the more I’m appalled at my discoveries. I abhor Glyphosate. I find myself grieving again over how a man-made product interfered to damage God’s perfectly created food and sicken His people.

Humans were not intended to be ‘Round Up Ready.’

It’s tricky to wrap up such a disappointing article, and yet THERE IS ALWAYS HOPE! Many things can be done to heal the gut and strengthen immunity (I am living proof)!

An ounce of prevention is worth a pound of cure, so to avoid exposure to Glyphosate:

Most of all, choose to have a living, vibrant relationship with Jesus! Our bodies are fearfully, wonderfully made and cared for by Him. Read the Bible daily to get to know the Heavenly Father. Talk to Him about everything, He cares! He designed your body and will sustain you as you depend upon Him!

“‘No weapon formed against you shall prosper and every tongue which rises up against you in judgement, you shall condemn. This is the heritage of the servants of the Lord and their righteousness is from Me,’ says the Lord.” Isaiah 54:17 NKJV 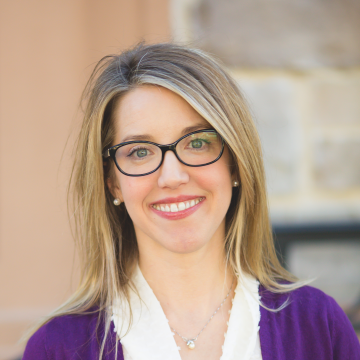 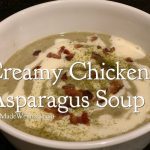 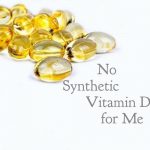 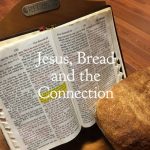 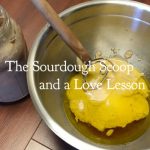 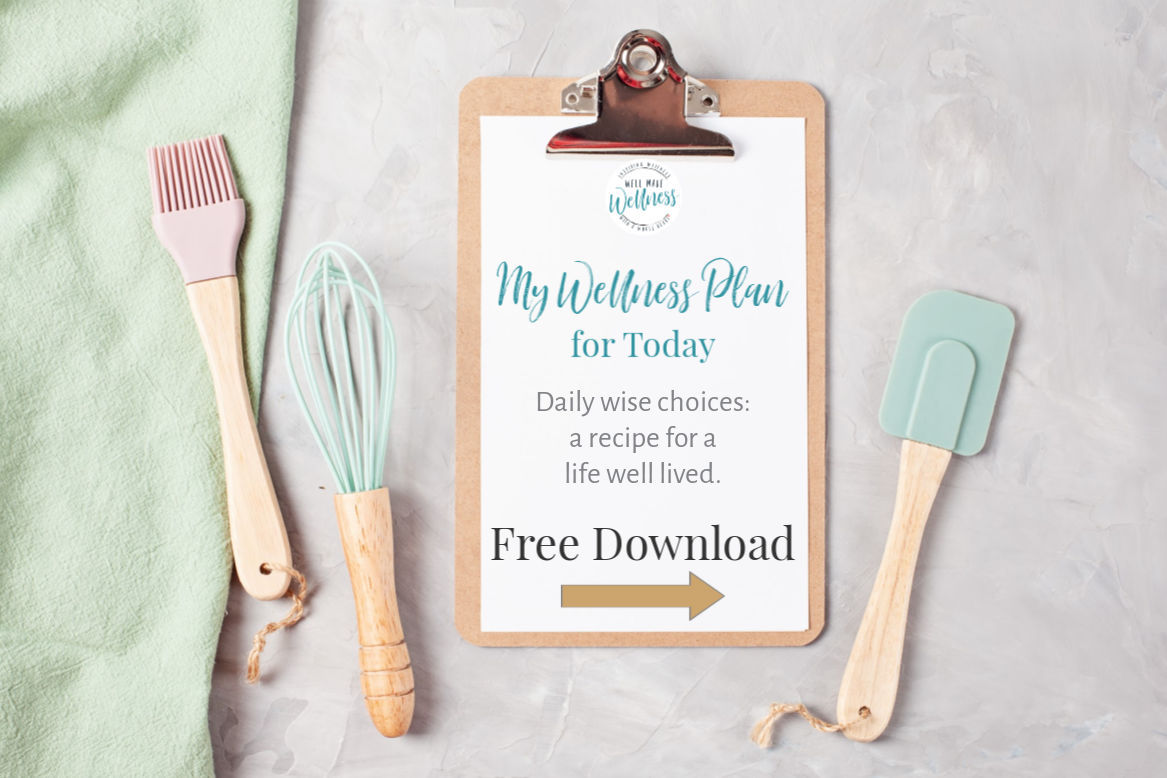